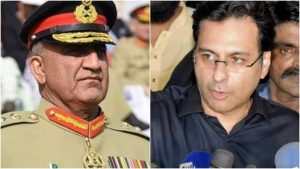 Monis Elahi, leader of Pakistan Muslim League-Q and son of Punjab Chief Minister Pervez Elahi, has said that a section is criticizing Bajwa on social media. This is the same Bajwa who turned the whole ocean for PTI, then he was right.

He said that he is not well today, I do not agree with PTI on this matter. He was all right as long as he was doing everything in your support, now he has turned traitor.
I have asked the PTI people to come on TV and tell how he is a traitor. And I will tell what this man has done for you.
He said, “I don’t know if you remember or not, but at that time Khan Sahib and the cannons were facing me.” But I didn’t take these things on myself and say, ‘Dude, this happened to me then, so I will do it now.’
He said this while speaking with Hum Maher Bukhari on Hum News program.
He further said that ‘in my opinion, Bajwa Sahib’s character was not bad at all, if he was bad, he would never have told me that you should go with Imran Khan.’
Elaborating, he said that when the time of no-confidence motion was near, there were offers from both sides, both from Mian Sahib and from PTI.
Everyone knows that my inclination was towards PTI. There was also a discussion with father about this and he (General Bajwa) also said that my wish is that you go to PTI.
Monis Elahi said that he only wanted to indicate. Here too the story was made, there was also made and they had to make a gesture.
Munis Elahi said that if Imran Khan wants to dissolve the assemblies tomorrow, he can do so, but if we are given an opportunity to decide about it, we would like to dissolve it after presenting the next budget.
He said that at present funds are to be distributed to many MPs so that the work on the projects started in the Buzdar government can at least start.