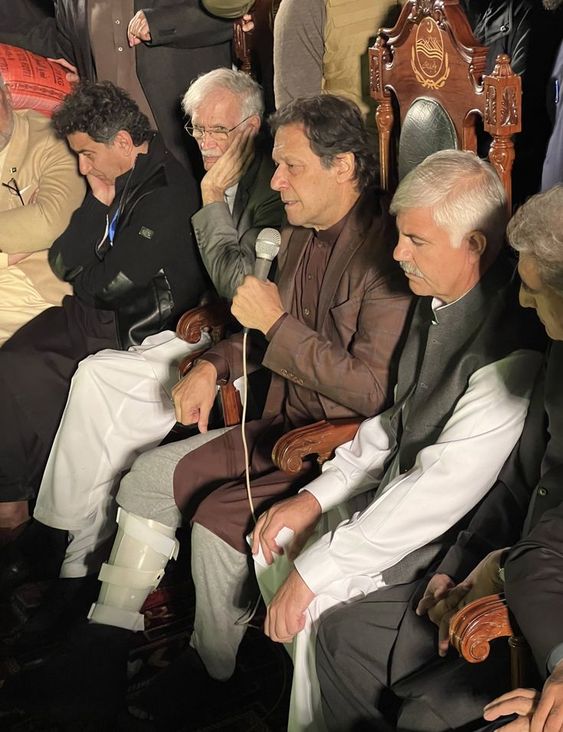 RAWALPINDI      –       Pakistan Tehreek-e-Insaf (PTI) Chairman Imran Khan Saturday announced that the lawmakers of his party would resign from all the provincial assemblies. Addressing the PTI supporters during a protest rally, Imran Khan said the PTI would resign from all assemblies and he would announce the date for resignations later after consultations with his party leaders. He said his party would not remain part of the current parliamentary system anymore. “I have decided that now we will not be part of this system,” the PTI chief said. “ I have decided not to go to Islamabad because I know there will be havoc and the loss will be to the country,” Khan said while speaking at a gathering of millions of supporters in the garrison city of Rawal pindi, near the capital Islamabad. Earlier, the former prime minister reached Rawalpindi through a chartered plane from Lahore.

The PTI chief said that his party decided to quit the present “corrupt system” by resigning from all the assemblies — a move that can result in dissolution of Punjab and Khyber Pakhtunkhwa assemblies and pave way for the snap polls.

“We are going to quit all the assemblies…It is better that we don’t remain part of the present (political) system,” former prime minister Khan said.

A beautiful package of Haqiqi Azadi long March, held on 26th of November 2022 in Rawalpindi.#حقیقی_آزادی_لانگ_مارچ pic.twitter.com/zzfvvJSoyt

PTI has decided to dissolve the province assemblies where it is the ruling party instead of going to Islamabad for a sit-in only to avert the country from chaos and unrest, Khan said.

“No one can stop millions of people if we decide to enter Islamabad but this will create chaos.”

The injured PTI chief who had survived an assassination attempt earlier this month especially flew from Lahore to participate in his anti-government long march that faced an anticlimactic end in Rawalpindi. In late October, Khan had embarked on his march from Lahore to force the government to announce early elections. He had said that the protest would culminate in Islamabad only after the ruling coalition announces the early election— a demand that the government has altogether rejected.

Addressing the charged crowd form a custom-made large stage where he had ascended by using crutches, ex-premier said that he had spoken with the chief minister of Punjab and KP and was soon going to meet with the provincial parliamentary parties to decide the date of the dissolution of provincial assemblies.

“But our movement of Haqeeqi Azadi march will continue till it succeeds.” Khan emphasised that he was sure to win the poll even if it were held after completion of the present term of government but a snap poll was the need of the country.

Criticizing the ruling coalition led by Pakistan Muslim League Nawaz (PML-N), he said that it has no road map for the development of the country and an early election was the only way out. He at the same time warned the powerful establishment what he said were real decision makers saying that the country was sinking rapidly with each passing day and economic collapse cannot be ruled out.

“When your economic security falls down, your national security affects.”

The opposition leader said that he had led the march to pressurise the “imported” government to announce the early election and the relevant institutions play their role in this regard. He underlined that the corrupt rulers knew that the country was trapped into a quagmire. He said in the same breath that PML-N supremo Nawaz Sharif who lives in self-exile in London and Pakistan People Party (PPP) leader Asif Ali Zardari were least bothered as they have stashed their billions of rupees abroad. During his lengthy speech, Khan also came down hard on the establishment what he said that it gave an NRO-like underhand deal to the present ruling parties—the PPP and the PML-N.

“I deplore that those who give them an NRO are not fearful that a cruelty was being committed with the country.”

Again hitting hard on the state institutions, he questioned why they do not learn from the mistakes of the past. He said that Pakistan broke into two parts when the force was used and injustice was committed with the biggest party of East Pakistan. He went on to say that PTI which was the biggest party of the country was being pushed to the wall.

The PTI chief said that it cannot happen that the powerful establishment used to oust the government by labeling it as “corrupt”, then gives them clean chit and brings them back into power. He admitted that his only failure while in government was that he couldn’t bring the powerful under the law and those who committed corruption. This is because the establishment was the de facto head of the NAB, he said. He alleged that the powerful were busy making deals with the corrupt instead of sending them behind the bars.

Talking about the assassination attempt on him in Wazirabad, Khan said that police investigation revealed that there were three shooters instead of one and the bullet that killed the PTI supporter was aimed for the shooter who is now in the police custody. He said it was a move to kill the main shooter on the spot like the killer of former prime minister Liaquat Ali Khan was shot at the crime scene.

He told his supporters that the rulers violated fundamental rights of PTI leaders and workers before and after his May 25 protest sit-in. He said that the government registered over a dozen cases against him like he was a culprit.

Chairman PTI said that the country cannot make progress until justice and rule of law is ensured. He deplored that he even failed to nominate the three accused in the case of armed attack on him despite Punjab being ruled by his own party.

“The country cannot move forward until the state institutions remain within their constitutional limits and fulfill their responsibilities,” he said while referring to the military establishment and the judiciary.

“I want that country to get real independence and I will fight to the last.” He added that any slave country had no future and any one had to fight to get independence.

He said that the people of Pakistan would get independence when they get out of the present “thana, patwari and katchery culture.” Khan also said that the history was looking towards a person who grew his assets rapidly and crushed the rights of the people under his feet.