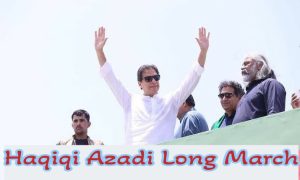 Shah Mahmood Qureshi, while talking to the ARY News programme 11th Hour, said that the Rawalpindi march will be a historic political gathering. He said that the party will follow Imran Khan’s orders.

The PTI vice-chairman said the incumbent government could not flee from elections and use delaying tactics to organise the polls. Qureshi said that PTI is demanding the organisation of fresh elections at the earliest.

He criticised that the incumbent government has no action plan to bring the country out of the crisis. He added that many personalities in the government are not willing to hold fresh elections.

The Pakistan Tehreek-e-Insaf (PTI) will flex political muscles in Rawalpindi’s Iqbal Park on Saturday (today) under the leadership of Imran Khan. The PTI chairman will depart for Rawalpindi from his Zaman Park residence at around 1:00 pm today.

Imran Khan will lead the PTI’s Haqeeqi Azadi March in Rawalpindi tomorrow. The political party will unveil its plan tomorrow whether it is holding just a political gathering in Rawalpindi or it will be converted into a sit-in.

The PTI chairman will announce the future strategy before the marchers tomorrow.

Lithuania to turn away migrants attempting to enter from Belarus

Willa Air, the new airline for influencers, is going to Coachella