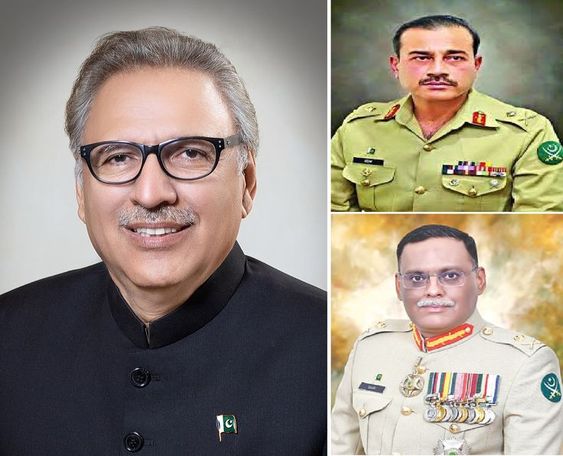 ISLAMABAD: President of Pakistan Dr. Arif Alvi signed the summary for the appointments of the new COAS, CJCSC on Thursday.

After the signature of the summary, Lieutenant General Syed Asim Munir has been appointed as a new Chief of Army Staff whereas  Lt. Gen. Sahir Shamshad Mirza as the Chairman of the Joint Chiefs of Staff.

The President made these appointments on the advice of Prime Minister Shehbaz Sharif.

Meanwhile, Defence Minister Khawaja Muhammad Asif has said that President Dr. Arif Alvi has approved the summary for the appointment of a new Army Chief and Chairman Joint Chiefs of Staff Committee.

Earlier, Prime Minister Shehbaz Sharif on Thursday sent a summary to President Dr. Arif Alvi for the approval of the appointments of senior military officers as the COAS and CJCSC.

Before signing the summary, President Alvi met former prime minister and Pakistan Tehreek-i-Insaf Chairman Imran in Lahore on Thursday and discussed the current situation of the country, particularly the appointments of a new Chief of Army Staff and Chairman of Joint Chiefs of Staff Committee.

Dr. Alvi, who flew to Lahore to meet the party chief after receiving the summary sent by Prime Minister Shehbaz Sharif, discussed with Imran all constitutional and legal issues during the meeting, which lasted for about 45 minutes at Zaman Park residence.

Later, the President went back to Islamabad. Meanwhile, PTI senior leader Fawad Chaudhry told media persons that the President’s House would issue an official handout in this regard between 6 to 7 pm today.

He further said that all constitutional and legal aspects regarding the appointment of a new army chief came under discussion during the meeting.

He maintained that the issue would be resolved as per the constitution and law of the land.

Pertinently, Lieutenant General Syed Asim Munir is the senior most officer after outgoing Army Chief Qamar Javed Bajwa and is currently serving as Quartermaster General in the Pakistan Army.