The Sanat Gallery at Karachi examined what ‘Naya Pakistan’ means to the contemporary artists of the country while celebrating completion of its 5th anniversary in a group show titled ‘Naya Pakistan’. Every single piece by 22 participating artists, who are practicing various genres of art, presented a variety of ideas, hopes, aspirations, and expectations for this new beginning deemed as ‘Naya Pakistan.’

“Whether you agree, or disagree politically, the promise that comes with a fresh start, a new beginning, a second chance, a do-over is undeniable!

Two democratically elected governments completed their five-year terms, and a third democratic election season was soon upon us. The call for ‘Naya Pakistan’ was an irresistible dream that we as a nation chased during 2018 elections, and it was a dream our current Prime Minister Imran Khan chased for 22 years.”

“Naya Pakistan went deeper than any political slogan. It came to represent an opportunity to correct wrongs, a shot at capturing what might have been missed. It was a renewal of hope for many of Pakistan’s disenchanted citizens,” said Abid Aziz Merchant, Co-Founder & Director Sanat Gallery.

Abdul Jabbar Gull was motivated by the urge for self expression; he shared his feelings and experiences through his work. He tried to explore the mysterious link of the corporeal world to the ethereal world, as his thoughts flew on delicate wings of imagination in which he used three dimensional, winged forms symbolically. By juxtaposing these winged forms with the Takhti, a symbol of awareness in wood and metal he explored numerous questions.

“My work for this show ‘Naya Pakistan’ shows hope, positivity and a great future of Pakistan through my personal symbols and vocabulary,” he said.

“For me, as an artist, ‘Naya Pakistan’ is something that we have felt in this one year after the arrival of the new government but I feel we are still struggling with the concept of ‘Purana (old) and Naya (new) Pakistan’,” he said.

“One may never know how things are and will become but I sincerely hope for a better future,” she added.

Abida Dahri focused on the state of confusion that has been created due to ‘Naya Pakistan’ in Purana Pakistan. A lot has yet to be cleared and proved for the people to believe that something concrete is going to happen in ‘Naya Pakistan’, she contended.

“To me the face of ‘Naya Pakistan’ has so far not come out completely it is still hanging in balance between “be” and “not to be”,” she said.

Ahmed Javed questioned the notion about what is ‘Naya’ in the country.

A ruler is a depiction of its society, where a new elected government in power and slogan of ‘Naya Pakistan’ is in much hype.

“Similar to it every government in the past and present has used the same technique and tactics of embezzling but faces only change. So what is ‘Naya’ in Pakistan?” he said.

Asif Ahmed’s work spoke about the ongoing situation of Naya Pakistan. The promise land with the increase in the basic needs was brought forward on the public platform.

“Through my work, I represent a labour child as an icon in the promising future. He not only carries the responsibilities, but also the dreams of an easy accessibility to the basic needs in Naya Pakistan,” he said.

The child is still in grey scale and is treated in the texture of the past. The deserving golden crown on his head is the Naya Pakistan we all have been waiting for, he added.

Haider Ali’s work depicted places he has been to and his experiences while visiting and/or living there. The drawing in transition interrupted leaving behind intersections of what could have been and what might come afterwards.

“I am strongly interested in the built environment, particularly architecture and spaces that we move into, out of, and across where I observe and reflect on how places interact and respond to present-day demography,” he said.

Hammad Gillani’s art practice represented the importance of a single act or moment in time. Moments combine to make a behavior of an individual or society; it can be the making of a thought process, ideology or the understanding of a certain time frame or an era.

“In my work gestural abstraction represents the behavior of either society or individual. And the process of work represents the development of that behavior,” he said.

Haya Zaidi’s work was a by-product of experiments with different surfaces, mediums and the traditional art of Miniature Painting. Her piece was inspired by the Ghazal ‘Subh-e-Aazaadi’ written by Faiz Ahmed Faiz.

“I interpret everyday situations in a dream-like fashion while reflecting on the environment around me. My work explores ideas of life, hope and renewal in a nation, waiting a new dawn of justice, reforms and rebirth,” she said.

“Nothing limits intelligence more than ignorance; nothing fosters ignorance more than one’s own opinions; nothing strengthens opinions more than refusing to look at reality. O, what blindness does great prosperity cast upon our minds!” he said.

Muzammil Khan works reflected on the economy as we speak. “My work depicts the segregation between the old and new Pakistan. The mystic fog on one side is the new Pakistan, the destruction on the other, is the old Pakistan,”he said.

Naveed Sadiq asked the question that arises with ‘Naya Pakistan’. “A violent confrontation or struggle is a question to resist or oppose between one being and another. ‘Knowing’ means that one possesses knowledge, shrewd suggestive or deliberate. But can, ‘believing’ mean that you have accepted something to be true and are confident of the trust in that? What does ‘trust’ stimulate for every living being? Is it authority or respect? He said.

Noman Siddiqui discussed how every political party in our country claims that their government will be different and better than the previous one, sadly it’s still the same. The crescent and the star in my work are intentionally positioned upside down as a comment on the current political situation.

“We only express love and patriotism for our country on 23rd March (Revolution Day) and 14th August (Independence Day). I have made balloons because its sensibility is fragile just like our promises and love for our country,” he said.

“I have painted this PTI Jalsa which was inspired by the actual event which took place in Lahore on the 1st of May 2016. Attending this Jalsa during the last year of my bachelor’s degree at NCA, instilled me with a tremendous amount of support for the current government. This is an interpretation of how I remember the event, and an attempt of communicating my anticipation from the current reign,” he said.

R.M. Naeem’s work reflected the hope and positivistic approach. ‘Unfathomable themes may be represented with the help of illustrating key points (turning points) from which the future stems (as vague as it may seem). It centers on the importance of hope & carrying a positive outlook towards the world as well as the surreal dialogue which unfolds between both ends (the creator & the viewer),” he said.

Rabia Farooqui explored the concept of envisioning a better world and making it a better place is an idea that has been drilled into our minds since childhood. Subconsciously, one is always aware of the repercussions of their actions that might hinder the process yet is also hopeful that another may take charge.

“Through my work, I have tried to capture the essence of a story that clearly has two sides by using imagery that is strongly rooted in its meaning. A narrative that has underlying tones of unpredictability stands to be humored by a state of oblivion – a reflection of how I truly believe one responds to the concept of Naya Pakistan,” she said.

Sadaf Naeem believed: “We are all destined to move forward but only while being together and with the help of supporting wheels.”

Shahid Rassam explained the logic of our mindset that helps us survive in this cruel world.

“Some primates, having anointed themselves as “more equal than the others” now act as ringmasters. However, “Monkey Business” is all one can expect if the entire cast consists of monkeys. In this “Trumped-up” era all that is required to condemn people is to brand them “unpatriotic”, “seditious” or an “infidel.” Those above the law can do whatever evil they like. Those responsible for administering justice, see no evil, and hear no evil. They do speak but not through their judgments,” he said.

“The nation still holds back its breath on the turns of event happening. The big question asked “will this U-turn be beneficial or will it be one more chocolate coated lost hope?” he said.

Syed Hussain explored themes of exploration and expedition. Fascinated by the traveling nature of his ancestors which led them unravel land of pure. Nostalgia for the past and an affectionate view of the present and future seem to be the abiding mood of my sentimental journey to uncover not only our past but also explore the ‘Naya Pakistan’.

“My collection of photographs that had ‘mutilated’ with time, is a reminder of the past and hopeful future ahead which includes impression of religious and ethnic statements on walls and background, and political slogans being reflection of settings prevailing,” he said.

Zahid Mayo’s work was different from his usual paintings. “I have tried to depict how I see ‘Naya Pakistan’ through this child. This portrait is a visual narrative, illustrating the gullible nature of contemporary Pakistan. I think Pakistan needs to liberate from its juvenile stage and brisk from incompetence,” he said. 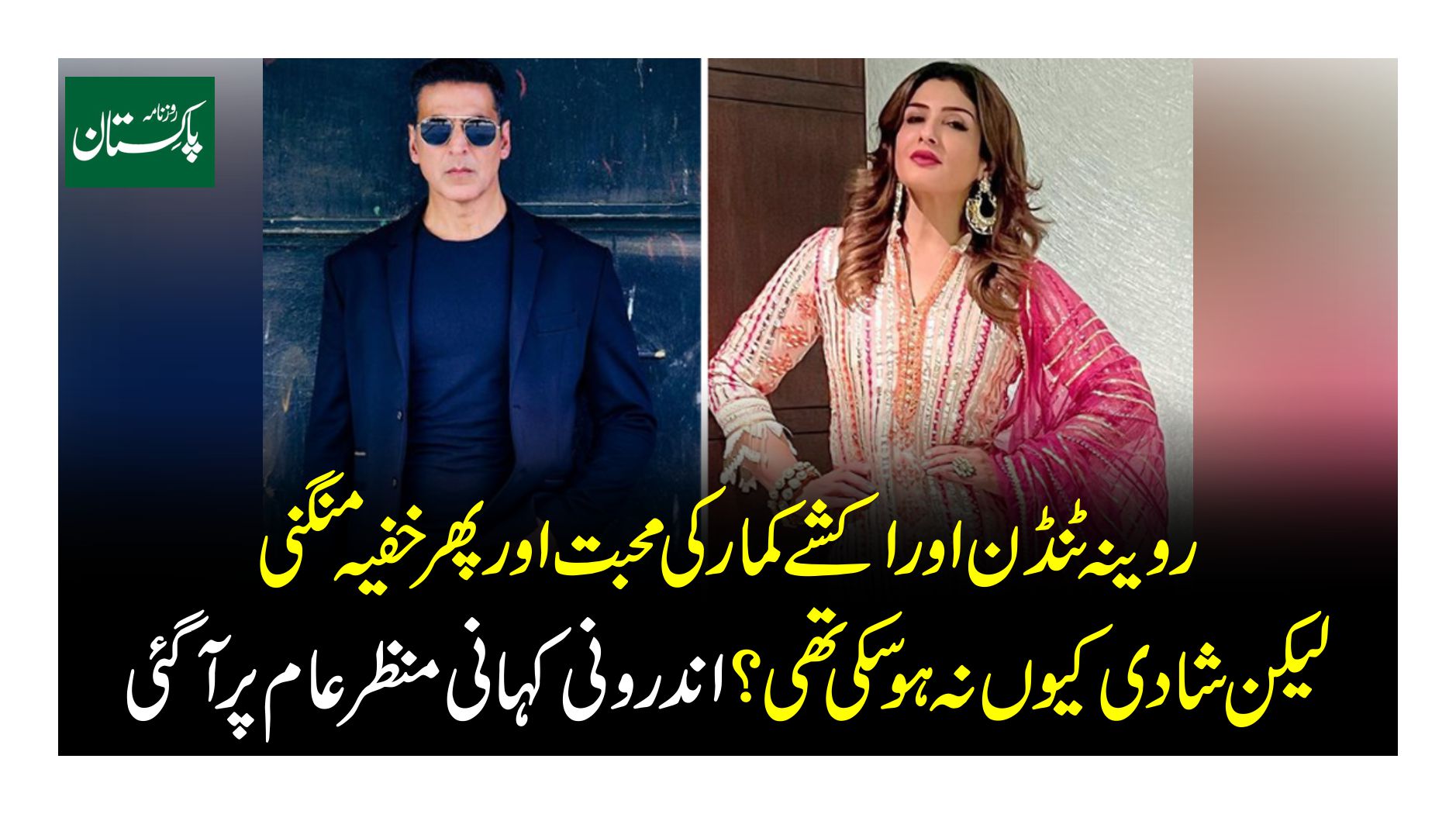 Why was Raveena Tandon and Akshay Kumar’s love and then secret engagement but not marriage? The inside story came out

This May Be Olivia Munn’s Most Relatable Mom Moment Yet