At the World Cup in Qatar, Iran’s soccer players on Monday declined to sing their country’s national anthem. In Tehran, two well-known actresses were arrested over the weekend for defiantly removing their head scarves. And at least nine prominent Iranians were summoned for questioning for daring to criticize the authorities.

High-profile Iranians are increasingly making public gestures of support for the protests that have gripped the country for the past two months, posting photos and messages critical of the government on social media, or flouting the country’s strict hijab laws.

In perhaps the most dramatic display, televised around the world, Iran’s national soccer team stood silently as the national anthem was played before a game against England on Monday, while some Iran fans in the stands sang the pre-revolutionary national anthem instead.

Fans carrying the pre-revolutionary flag — viewed as a symbol of protest against Iran’s theocratic government — were barred from entering the stadium in Qatar on Monday for the Iranian team’s opening match against England unless they surrendered the flags. At least one fan held up a “Woman! Life! Freedom!” sign during the match, and some Iranian fans could be heard chanting “without honor” — both slogans adopted by protesters in Iran to condemn the Iranian regime and security forces.

The displays at the World Cup highlighted the extent to which many prominent Iranians, including artists, musicians and athletes, have publicly come out in support of the protest movement.

Anger over the country’s dress restrictions for women and their enforcement helped fueled the protests. They were sparked by the death of Mahsa Amini, a 22-year-old Iranian Kurdish woman, in the custody of the morality police in September after she was accused of violating the law on head scarves. But they have morphed into broader calls to end the Islamic Republic.

Some 15,000 Iranians have been arrested and several hundred killed after two months of protests and a heavy crackdown by the authorities in dozens of cities across Iran, according to rights groups.

Many high-profile Iranians have already been targeted by the authorities for coming out in support of the protesters, in what appears to be an effort to undercut the sustained momentum of the largely leaderless movement by targeting musicians, artists and journalists who have backed the demonstrations.

Two prominent actresses, Hengameh Ghaziani and Katayoun Riahi, were arrested on Sunday for removing their head scarves and participating in the protests, according to state-run news media. The actresses were charged with “collusion with the intention of acting against the state security” and “propaganda against the state,” IRNA, Iran’s state-run news agency, said.

In a statement posted to her personal Instagram account on Saturday, Ms. Ghaziani, 52, denounced the government for their crackdown on the young people who have joined the demonstrations.

More on the Protests in Iran

Cities across Iran have been embroiled in demonstrations prompted by the death of a young woman, Mahsa Amini, while she was in police custody.

“How many children, teenagers and young people have you killed — is it not enough with the bloodshed?” she said in her post. “I hate you, and your historical reputation.”

Ms. Ghaziani was arrested the next day, hours after uploading another video, from the streets of Tehran, in which she is seen staring defiantly into the camera with no head covering before turning her back and tying a ponytail in her hair.

“From this moment on, whatever happens to me, know that I will be with the people of Iran until my last breath,” she wrote in the post, which garnered an outpouring of support and concern over her fate as it coursed through social media.

Ms. Ghaziani was taken to the prosecutor’s office hours later by security personnel, who said that the charges against her included “communication with opposition and counterrevolutionary media,” according to IRNA.

A number of prominent Iranians, including “five movie personalities” were summoned to the prosecutor’s office on Saturday for publishing “unverified comments about the recent events, as well as the publication of provocative material in support of street riots,” according to the news agency Mizan, which is owned by the Iranian judiciary. The agency did not give a total number for those summoned, but named nine people.

The Iranian regime’s relationship with its internationally acclaimed cinema industry has been historically complicated as it has tried to claim credit for the sector’s success abroad while policing its messaging and reach.

“We as filmmakers have faced many red lines in the past years, such as the prohibition of topics like child-killing and violence against children,” the Iranian Short Film Association said in a statement last week, adding that now those scenes of violence were playing out on the streets of their cities at the hands of the government. “From now on, we will live and work in the reality.”

The actress Taraneh Alidoosti attracted global attention earlier this month after she appeared in an Instagram post without a head scarf holding a placard emblazoned with the “Woman! Life! Freedom!” slogan.

Last week, Asghar Farhadi, the acclaimed Iranian director, joined a chorus of condemnations of the death of a 10-year-old boy, Kian Pirfalak, who was killed when his family’s car came under automatic weapons fire.

“You will pay for the blood of these pure children that you have killed,” Mr. Farhadi said in an Instagram post.

The movie industry is not the only entertainment sector embroiled in the crackdown.

Toomaj Salehi, a rapper who was arrested after releasing music in support of the demonstrations, has been detained since late October in Tehran’s Evin prison complex, which is notorious for widespread human rights violations.

Iranian athletes in various sports have seemingly made gestures in recent competitions that were interpreted as support for the national protests, led by women.

The climber Elnaz Rekabi competed without wearing a hijab in South Korea in October. (She later said it was inadvertent, although many believe her explanation was made under duress by Iranian authorities.) At an international beach soccer competition in early November, Saeed Piramoon scored the winning goal for Iran and held both hands above his head, mimicking the cutting of hair that some women have rebelliously done in the protests.

But soccer, and the beloved Team Melli, as the national team is known, has been perhaps the most high-profile sport to have been affected by the protests. One of the people summoned for questioning by the authorities in Tehran over the weekend was a former defender on Iran’s national soccer team, Yahya Golmohammadi.

Players on Iran’s national team and in its domestic soccer league have recently become emboldened in supporting the protests by not singing the country’s national anthem and by declining to celebrate goals scored. That carried into the World Cup match against England on Monday, which Iran lost 2-6. There was no celebration by Iranian players after either of their goals.

Speaking at a news conference on Sunday before Iran’s first match, against England, Ehsan Hajsafi, the team’s captain, said, “We have to accept that the conditions in our country are not right and our people are not happy.”

“We are here, but it does not mean that we should not be their voice, or we must not respect them,” he added.

Carlos Queiroz, the Portuguese coach of the Iranian national team, told reporters last week that players were free to protest “as long as it conforms with the World Cup regulations and is in the spirit of the game.”

The players find themselves in a difficult position. Displays of activism carry the risk of reprisal from Iranian authorities, especially for players who must return home to play in Iran’s domestic soccer league.

To show no solidarity with the protests could lead to harsh criticism from fans; many do not believe Iran should participate in this World Cup because of the unrest in the country. Some activists had called for Iran to be banned from the tournament. More recently, some fans were outraged when photos emerged of the players in frivolous, celebratory poses as children were being killed in the protests.

“Iran is a nation of soccer fanatics, but I think decades from now what Iranians will remember most about this World Cup is not who played well, but who showed heart,” said Karim Sadjadpour, an Iran expert and senior fellow at the Carnegie Endowment for International Peace, in a recent email. 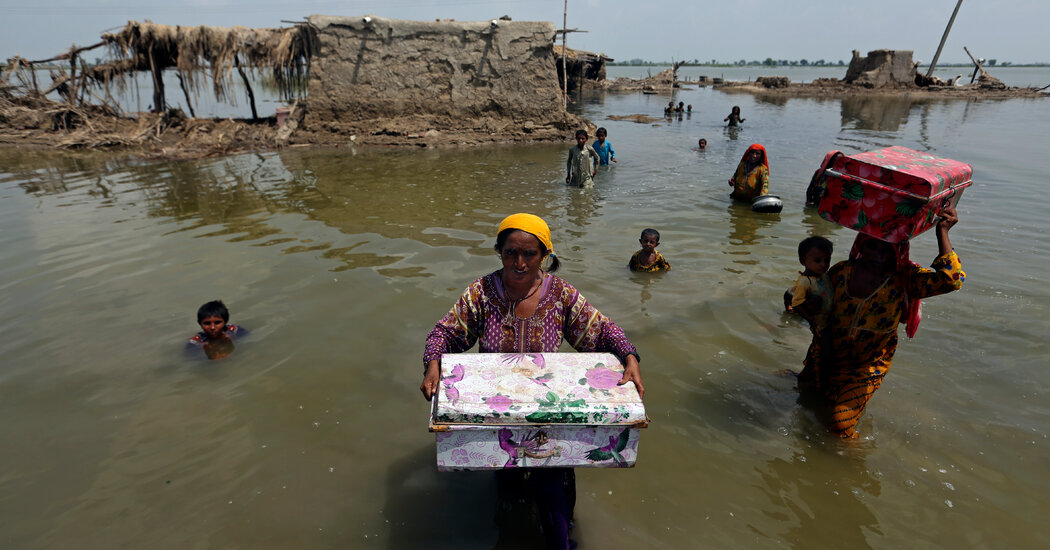 Developing Nations Have a Message at Global Climate Talks: Polluters, Pay Up

Thousands march in Spain to demand end of violence against women