Priyanka Chopra and Nick Jonas never fail to give major couple goals. From leaving mushy comments under each other’s posts to planning surprises, the two are one of the cutest couples in town. Agree, right? Well, in case you have a doubt, rush straight to Priyanka’s Instagram  Stories. The actress has shared a picture of her ice cream treat and we can’t stop drooling. Of course, Nick Jonas got it for her. The text attached to the pic read, “Thanks, hubby. Best start to the weekend, Nick Jonas.” 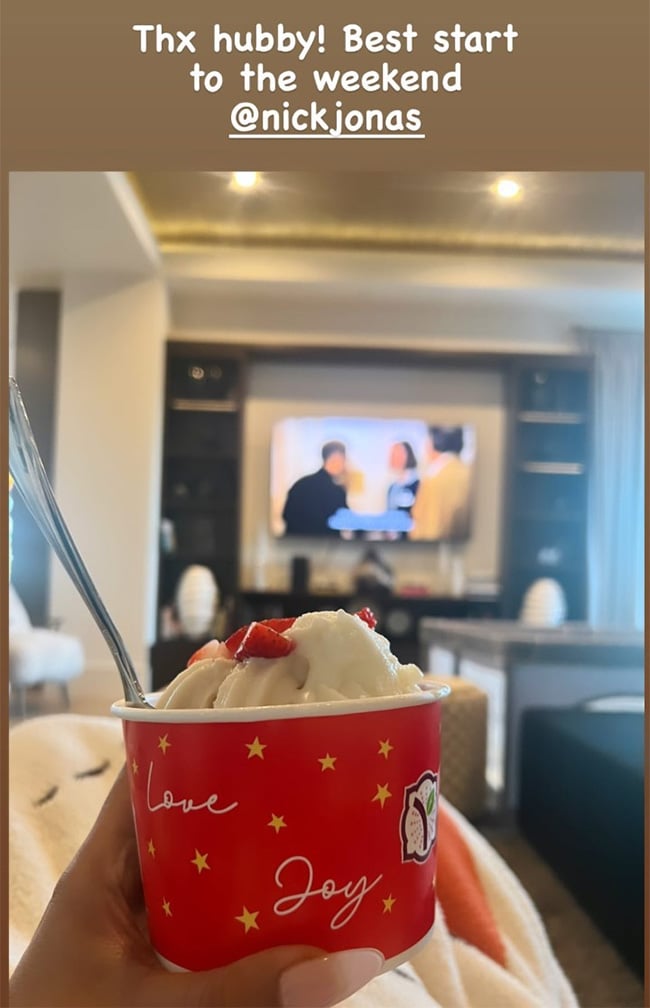 Priyanka Chopra was in India earlier this month. She paid a visit after three long years. From work events to catch up with friends, Priyanka had a blast, to say the least. On her last day, Priyanka shared a video from her time in Mumbai and wrote, “And it’s a wrap on Mumbai! Ghar ki baat hi alag hai! There is really nothing like coming home. These last couple of days, I’ve been so moved by all the love and support that has been shown to me. I can honestly say if weren’t for all of you that showed up and my team, I don’t know where I’d be.”

After returning to Los Angeles, California, Priyanka Chopra dropped a heartwarming frame featuring herself, Nick Jonas and their daughter Malti Marie Chopra Jonas. For the caption, she simply wrote, “Home.”

We also got a glimpse of Malti Marie Chopra Jonas in Priyanka Chopra’s Diwali album. The little one is seen performing aarti with her parents.

Priyanka Chopra and Nick Jonas welcomed their first child Malti Marie Chopra Jonas via surrogacy in January, this year. At that time, she wrote, “”It’s so joyful! I can’t tell you how my heart just goes…I think it’s something that I have been waiting for a very long time. It has happened now and I cannot conceal my happiness. I don’t even remember Priyanka and my son anymore. All I think about is the little one.”

Priyanka Chopra will next appear in Citadel. She also has Farhan Akhtar’s Jee Le Zaraa.

Shilpa Shetty Was Spotted In The City Looking Like This

‘We Cannot Steal Your Future’

An Aboriginal art show that explores the role of kinship in culture while works convey pain, hope and beauty