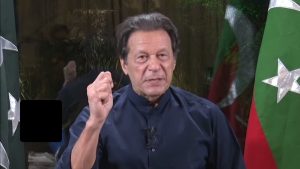 Nawaz Sharif appoints army chief, he wants him to get Imran disqualified and their corruption cases ended.

He said this while delivering a televised speech to the Long March participants in Chiniot on Tuesday.

He said that Nawaz is a cowardly person and absconder and he is running from the elections as he fears that his party would badly be defeated by the PTI.

He added that how an absconder could take the big decisions of the country and make an important appointment, demanding that this joke with the nation must be stopped at once.

He observed that the rule of the Jungle has been imposed in the country, and how the country could make progress in this prevailing situation.

He recalled that the CEC has always passed judgments against the PTI and never bothered to take up cases of the PML-N and PPP as the CEC is the man of the PML-N.

He further said that the CEC had implicated the PTI in wrong cases such as foreign funding case, the Toshakhana case and others, adding that the same kind of cases of the PML-N and PPP are lying to the ECP for a long but he has never taken up these cases.

He beseeched the CJP to hear their cases so that the PTI could get justice and get rid of the biased Chief Election Commissioner.

The PTI chairman said to the CJP, “You are only our hope for justice and the whole nation is looking towards you.”

He lambasted the economic policies of the government and feared that the country might go default.

Ishaq Dar, who came with this claim that he would correct the economy, he has utterly failed and his assertions proved wrong.

He said that Ishaq Dar, who came with this claim that he would correct the economy, has gone dumb and missing from the scene for a long, adding that Dar has utterly failed and his assertions proved wrong.

Earlier Pakistan Tehreek-e-Insaf (PTI) started the long march for the 6th day from Chiniot today under the lead of PTI leader Asad Umar.

The first destination of the PTI marchers will be Bhutto Colony in Chiniot at 12:00 noon.

The PTI chief will address the marchers via video link at 4:30 pm.

In an interview with an international newspaper regarding relations with the United States and the matter of cypher, Pakistan Tehreek e Insaf (PTI) Chairman Imran Khan on Monday said the propaganda cell presented his statement in the wrong way, Bol News reported.

In a speech, Imran Khan said the two journalists, whom he gave interviewed, had also to give clarification. Ostensibly pointing towards the Pakistan Muslim League-N (PML-N) social media wing, he said the propaganda cell cherrypicked statements and gave them to journalists. Pixel 6A: All the Rumors We’ve Heard About Google’s Upcoming Budget Phone

Shahid Khaqan reveals when Nawaz Sharif will return to Pakistan