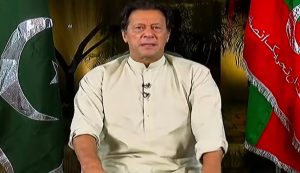 Former prime minister and Pakistan Tehreek-i-Insaf (PTI) Chairman Imran Khan demanded the CJP to take notice of the non-registration of an FIR for his murderous attempt, issues of Azam Swati and Arshad Sharif.

He lamented when a former prime minister could not have an FIR registered in this country, how a common man can get justice here.

He vowed that he would not withdraw from his stance until he is alive.

He said that Arshad Sharif was severely tortured to death, adding that it must be investigated to know against whom Arshad did his programmes and whose corrupt practices he exposed and why he had to leave the country.

The mother of Arshad Sharif was asking for the postmortem report of his assassinated son but the aggrieved mother failed to get the report but it was leaked to the media.

He expressed these views while delivering a televised speech to the marcher of the Long March here on Thursday.

Those countries get stronger and make progress where there is rule of law and law is equal for everyone.

Without justice, no country gains prosperity and development, he added.

He again strongly accused a military officer of being involved in his murder attempt.

He again demanded the CJP to take notice of these incidents as the whole nation is looking towards him.

He appealed to the people to participate in the long march as it is a fight for the real independence of the country.

Earlier, Pakistan Tehreek-e-Insaf (PTI)-led Azadi march resumed from Wazirabad on Thursday from the same spot where Imran Khan was shot at previously.

PTI leadership said that the security measures have been tightened in light of the attack on Imran Khan that took place last week and claimed one life and left 14 injured including the PTI chief.

At least 8 dead, 20 injured in blast at coal mine in Serbia