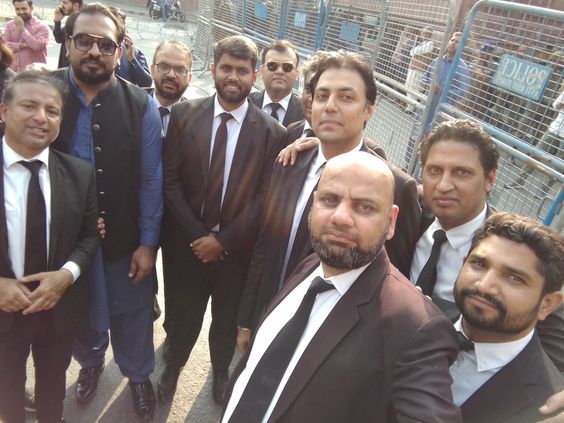 LAHORE: Today, a protest demonstration was held in front of IG Office Lahore under the auspices of Insaf Lawyers Forum. In which the lawyers of Pakistan Tehreek-e-Insaf and representatives of Insaf Youth Wing also participated. The participants of the protest shouted slogans against the Punjab Police and Establishment.

The participants in the demonstration said that the firing on Pakistan Tehreek-e-Insaf’s real freedom march in Allahwala Chowk Wazirabad and the murderous attack on former Prime Minister Imran Khan was an attack on Pakistan. Despite the order of the Supreme Court of Pakistan, the Punjab Police has not only insulted the apex court by not registering an FIR as per the application of PTI Chairman Imran Khan, but has also violated the Constitution of Pakistan and the Criminal Code. The Punjab Police is taking orders direct from the establishment, which does not want three people nominated by former Prime Minister Imran Khan to be named in the FIR.

Sources told that the case was registered under the charges of murder, attempt to murder, terrorism and others at the City Police Station in Wazirabad. Naveed, the arrested suspect, was nominated in the FIR, sources added. Whereas, in the presence of PTI Chairman Imran Khan’s application, the police had a legal responsibility to file an FIR according to the contents of that application.

It should be remembered that a day ago the Supreme Court of Pakistan had ordered the IG Punjab to ensure the registration of the FIR within twenty-four hours, after that the first information report (FIR) was lodged at the Wazirabad police station after a lapse of 96 hours of the incident.

It is pertinent to mention here that Imran Khan and several other PTI leaders were injured after a man opened fire near the PTI reception camp at Allahwala Chowk during party’s long march.

According to details, unidentified assailants opened fire on PTI Chairman Imran Khan’s container near the Allahwala Chowk in Wazirabad, injuring six people and killing one.

Iran rejects G-7, US accusations over drone attack on ship

PM thanks KSA for extension in $3bln deposit term