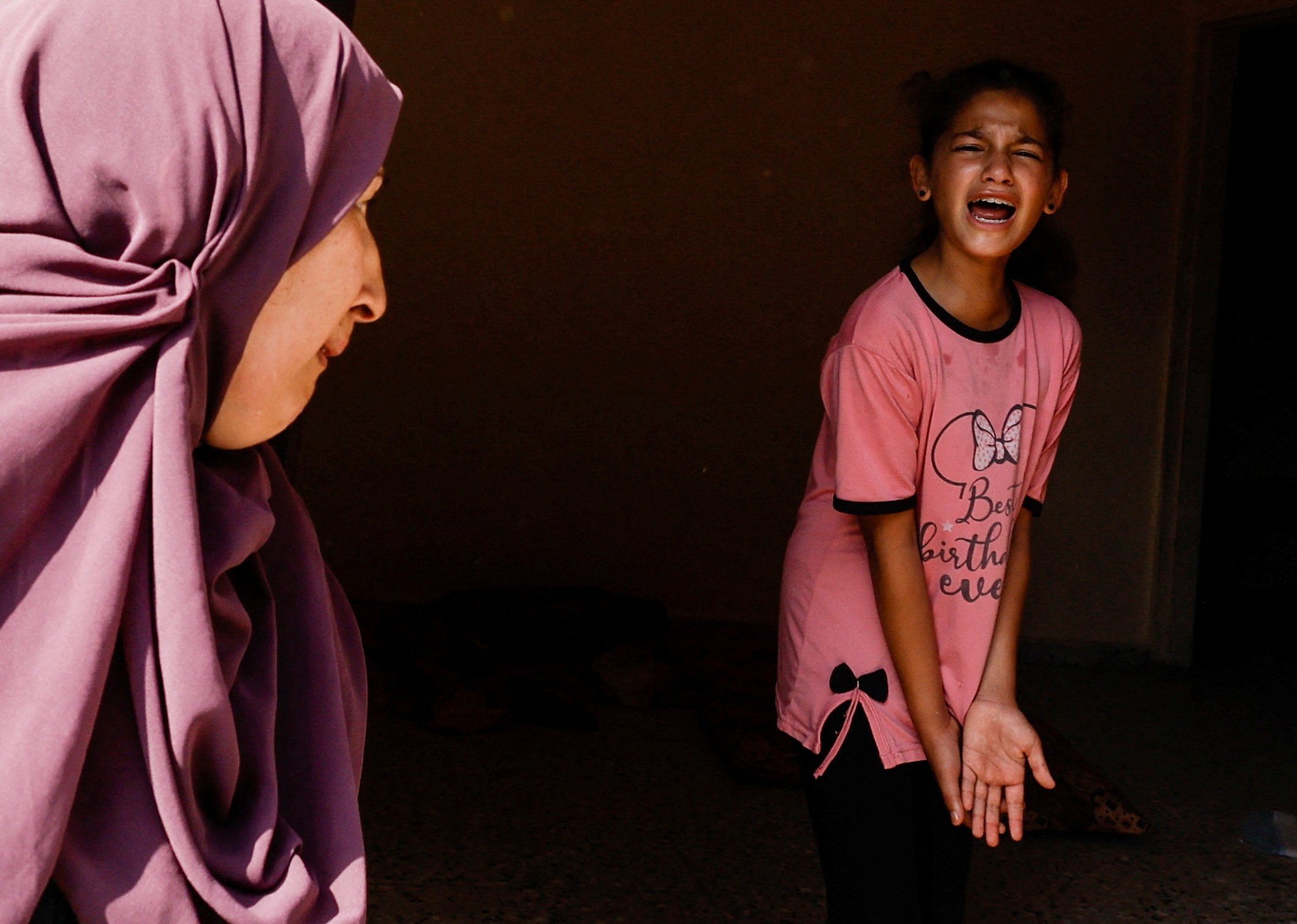 When Israeli missiles started landing in Gaza in early August, shattering glass and collapsing buildings, Jouman Abdu put on headphones, covered her eyes with a blindfold and stretched on the couch.

The 8-year-old Palestinian girl said she came up with this ritual to escape the bang of the blasts, the second round of steady violence she had experienced in 15 months.

“I didn’t want to hear the sounds of explosions,” she told Reuters as she sat with her mother. “I was afraid they would bomb our house.”

The latest outbreak of hostilities lasted only a weekend but buttressed the trauma faced by Palestinian children growing up in the densely populated strip in the years since 2007 when Israel and Egypt imposed a blockade, cutting it off from outside, four people, including parents and experts, told Reuters.

“If you are a child in or around Gaza and you are 15 years old, in your life you have already gone through five different conflicts,” said Lucia Elmi, special representative of UNICEF in Palestine.

Israel this month launched a series of airstrikes against the Islamic Jihad movement in Gaza, in response to what Israeli authorities said was a concrete and imminent threat from the group following the arrest of one of its senior leaders.

The Islamic Jihad movement fired more than 1,000 rockets toward Israel and held Israel responsible for the escalation, saying it had informed Egyptian mediators it was about to call off a state of high alert among its fighters when the Israeli strikes began.

Asked for comment on the mental health impact of the blockade and repeated violence in Gaza, the Israeli military said the reality of fighting was difficult for Palestinians in Gaza and Israelis who live around the strip.

In a statement it said it “took every feasible effort to reduce damage to civilians and civilian property.”

Reuters was unable to independently confirm the claims made by Israel and Islamic Jihad.

At least 49 people, including 17 children, were killed and more than 360 people, among them 151 children and teenagers, were wounded, Gaza health officials said, before an Egyptian-brokered truce halted the fighting.

Children make up about half of Gaza’s 2.3 million Palestinian population.

There are no safe shelters in the strip, where Palestinian officials and international humanitarian organizations have warned that the healthcare system is on the brink of collapse.

This was already the case after May 2021, she added, when 11 days of fighting between Israel and the Islamist Hamas left 250 Palestinians in Gaza and 13 people in Israel dead, leading to “a cumulative effect of long-lasting trauma for children.”

No casualties were reported on the Israeli side this time but children living in Israeli communities around Gaza, within immediate range of rockets fired from the strip, also suffer from trauma, UNICEF’s Elmi said.

Israeli studies over the years have established that children under continuous exposure to bombardment experience high levels of stress, with particularly high levels of anxiety in areas near Gaza.

“There is endless research and work regarding the long-term effects of exposure to traumatic situations,” said psychologist Ilana Elyassi, speaking in her office in Gevim, in southern Israel. “I think it affects almost any area of the personality, the internal world and people’s functionality.”

Sitting in a fortified room in the southern Israeli city of Ashkelon, Ravit and Amit Shubely played with their two children to distract them from possible sirens warning of incoming rockets.

Even inside a fortified room, “there’s always a fear of death,” Ravit, the mother, said. During the fighting, her children kept waking up at night and repeatedly asked her what to do in case of sirens, she added.

“We live here in a kind of pressure cooker in which you don’t know when it can hit you. It can happen at any time, in crazy hours and you cannot control it,” said Amit, the father.

In Gaza, aid groups say, Palestinians do not have bomb shelters or the missile defense systems that protect Israelis. Access to health services is limited, movement is severely restricted and the psychological scars run deep, they say.

A 2015 study by the nongovernmental organization Physicians for Human Rights-Israel found that the average life expectancy among Palestinians in the occupied territories was 10 years less than that of Israelis due to significant disparities in health conditions – and the gaps were increasing.

Dr. Sam Owaida, a psychiatrist with the Gaza Community Mental Health Program, said the effects on children of the repeated bouts of fighting ranged from refusing to leave the house and clinging to parents to problems with speaking, bed wetting and sleep disturbance.

In Gaza, “there is no such thing as post-trauma, the trauma is continuous,” he said.

Parents and caretakers, many already in poverty due to Gaza’s shattered economy, have become more aware of coping techniques but the resources available in Gaza may not be enough to fill the growing need for trauma support, he added.

A December 2021 humanitarian needs overview by the U.N. Office for the Coordination of Humanitarian Affairs (OCHA) determined that existing shortages in specialized personnel and medication in Gaza were compounded by COVID-19 and last year’s war, with many front line workers either overloaded or unable to return to work.

Elmi said UNICEF is working with partners to scale up counseling services in the strip.

For Najla Shawa, a humanitarian worker and mother of two in Gaza, this round was difficult to experience as a parent despite a relatively short duration. Previous traumas in her daughters, Zainab, 7, and Malak, 5, surfaced almost immediately, she said.

The girls refused to go anywhere alone – even to the bathroom – and whenever loud explosions were heard, Zainab complained of intense physical pain in her chest, their mother said.

“I was trying my best to really hold myself together and just be this ideal parent,” Shawa told Reuters. “How can we comfort them? The fear is shared by everyone, adults and children alike.”

“There is no such thing as ‘they will get used to it,'” she added. “It is as if you live through the war for the first time all over again.”