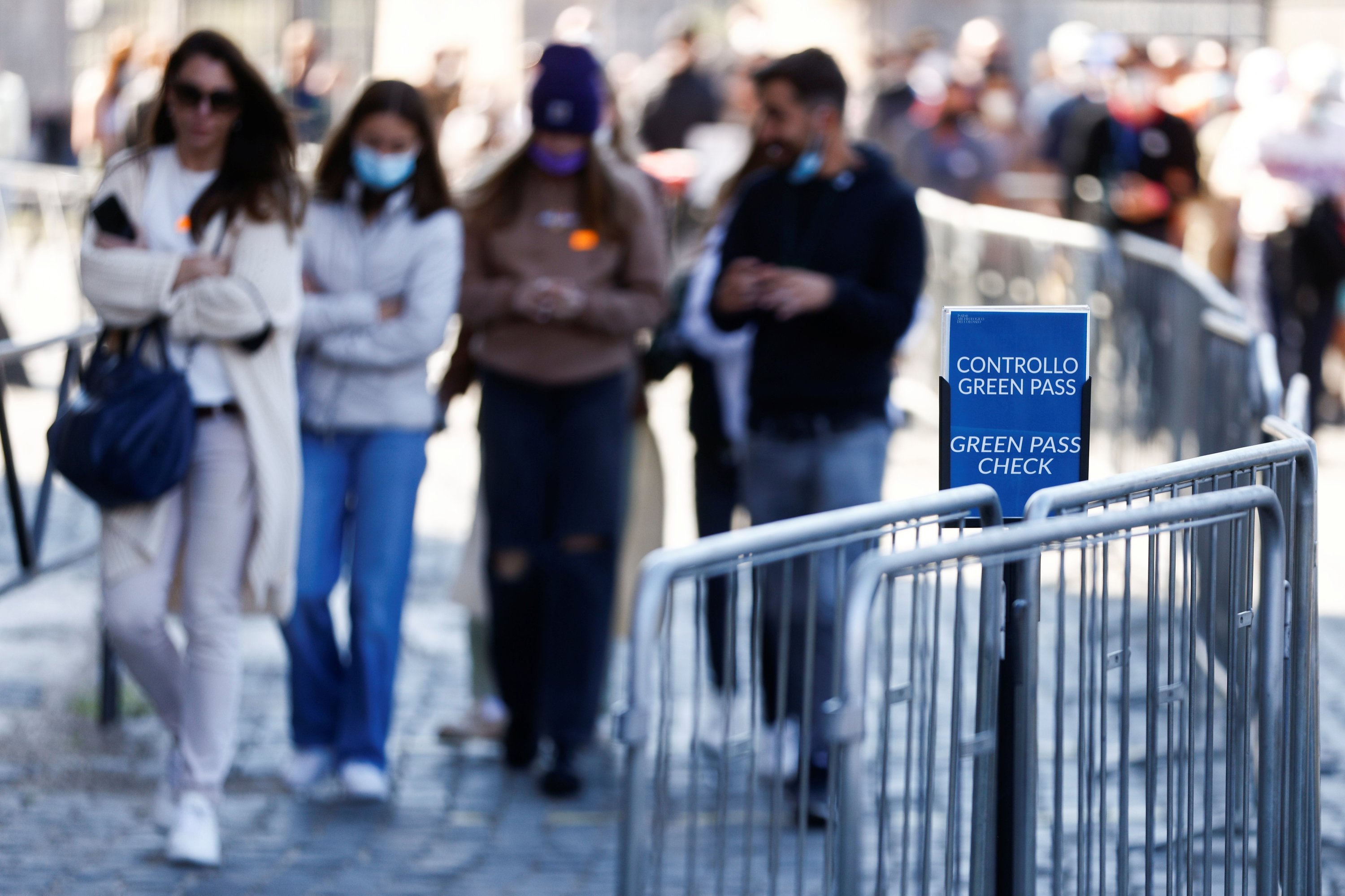 Starting Friday, all workers in Italy will be required to show a COVID-19 health pass as the country is imposing one of the toughest anti-coronavirus regimes in the world, that has already provoked riots and which many fear will cause “chaos.”

More than 85% of Italians over the age of 12 have received at least one shot of a COVID-19 vaccine, making them eligible for the so-called Green Pass certificate.

But according to various estimates, about 2.5 million workers, out of 23 million in total, are unvaccinated, and risk being denied access to the workplace from Oct. 15.

“You have no idea of the chaos that we will have in firms,” the president of the heavily industrialized northern Veneto region, Luca Zaia, said recently.

Unvaccinated workers can still get a Green Pass by getting tested for the coronavirus or with a certificate of recovery if they contracted the virus within the past six months.

But if they opt for tests, they have to take them at their own expense, and repeat them every 48 hours.

Zaia suggested there was not enough testing capacity to meet potential demand, raising the prospect of mass absenteeism from work.

“The entrepreneurs I talk to are very worried,” he said.

Green passes are already required for teachers and other school workers, and also for other activities such as eating indoors in bars and restaurants, or going to the cinema, museums and football games.

But they are not popular, at least among a sizable minority of Italians – as shown by last Saturday’s riots in Rome, where an anti-pass demo degenerated into an assault on a trade union building led by the neo-fascist Forza Nuova party.

Anyone caught in the workplace without a Green Pass risks fines ranging from 600 to 1,500 euros ($693 to $1,734), and those who fail to turn up for work because they don’t have one face suspension or no pay – but cannot be fired.

Meanwhile, employers can be fined 400 to 1,000 euros for not checking if their staff comply with the rules.

The measure, which follows a similar initiative introduced in Greece last month, was also intended to boost vaccination rates.

Business lobby Confindustria has been among the staunchest backers of the Green Pass in Italy, one of the European countries hardest hit by the coronavirus with more than 130,000 deaths.

The focus is on “creating workplaces that are as safe as possible … because it is the only way to ensure public health and economic recovery,” Vice President Maurizio Stirpe told the Corriere della Sera newspaper.

Trade unions, on the other hand, have been skeptical. They first called for a blanket rule forcing all Italians to get jabbed, arguing that option would have avoided discrimination between vaccinated and unvaccinated workers.

But the government has stopped short of that, partly because one of the members of Draghi’s left-right coalition government, the nationalist League party of Matteo Salvini, opposed compulsory vaccines.

Once the government ignored the union’s advice, they successfully requested that unvaccinated workers should not get fired, but only suspended. But they did not manage to also obtain free COVID-19 tests for workers, paid by the state or employers.

“Personally, I will get tested,” Stefano, one of the people who protested in Rome last week, told Agence France-Presse (AFP). But he complained that it was “absurd” for him to have to pay to continue doing his job.

So far, only dockworkers in Trieste have managed to win the privilege of free COVID-19 tests, after threatening to block all activities in their port, a major hub in the northeast, from Oct. 15.

Meanwhile, there are concerns violence could break out again next Saturday, when the no-pass movement is planning further protests and unions are preparing for a big anti-fascist rally in Rome.

Training to restrict blood flow finds fans in the Olympics, but it carries risks

Astros once again in World Series, await winner of Braves-Dodgers