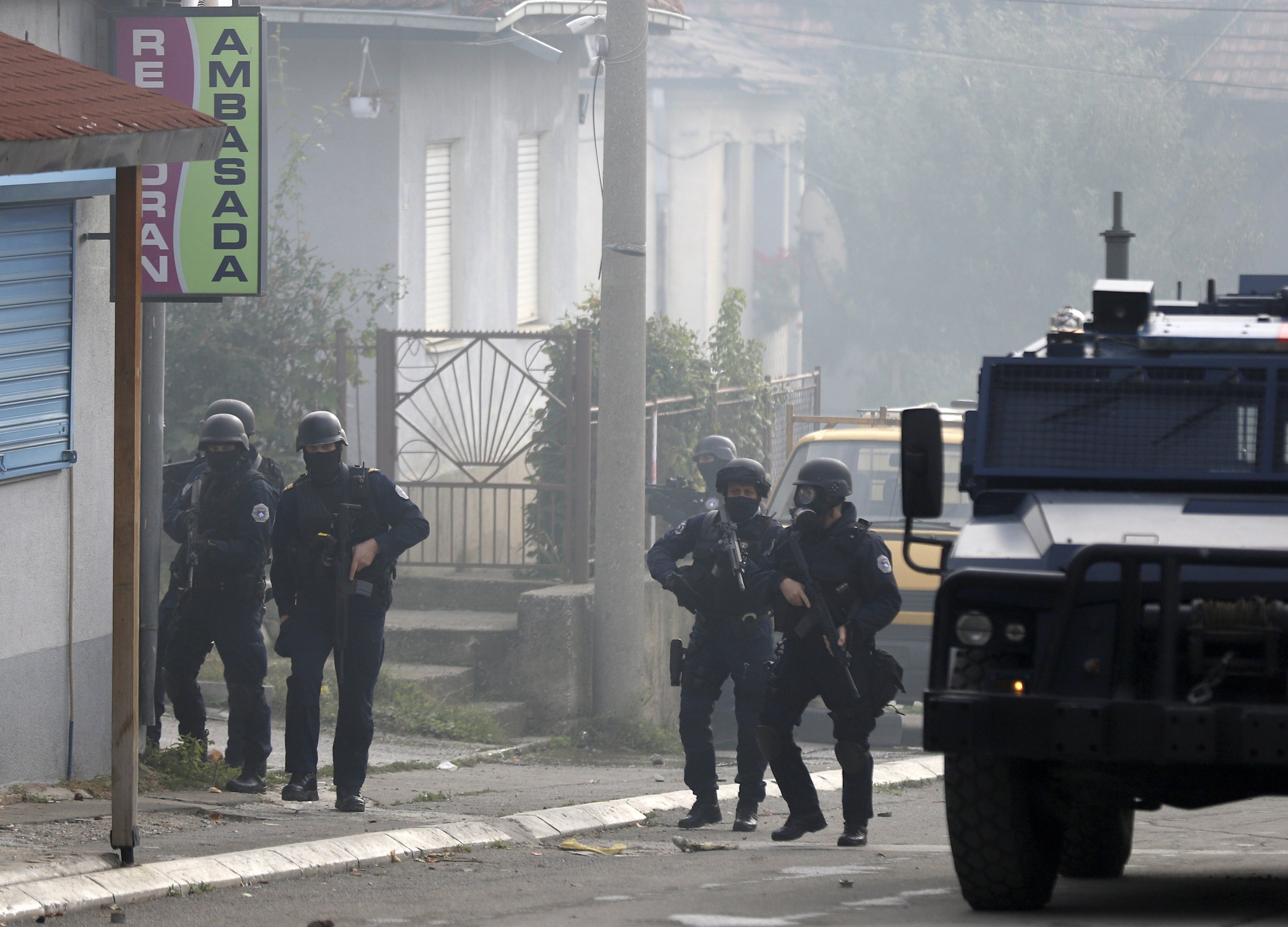 Tensions between Kosovo and Serbia increased Wednesday after police in Kosovo clashed with ethnic Serbs during a police operation against the smuggling of goods.

According to media reports, one Serb was killed, while at least six police officers were injured. The violence prompted an angry response from Serbia for the international community, including NATO-led peacekeeping mission KFOR, to restore order and prevent “wider chaos.”

The region is already on edge after a border dispute last month between Kosovo and Serbia over vehicle license plates threatened to spiral into violence. But Western officials intervened and KFOR forces were deployed to the area, ending the spat.

A Kosovo police statement said Wednesday’s raids were held in four areas, including northern Mitrovica which is mostly populated by ethnic Serbs. It said that “criminal groups gathered in an organized way to block roads with vehicles, used liquid gas tanks, stun bombs, shot with weapons and hand grenades to hamper and attack custom and police officials committing their duty.”

Police said six officers were injured during the clashes. Eight Serbs were arrested, according to police, adding that the raid was over and the situation is now calm.

Petar Petkovic, a Serbian government official in charge of Kosovo talks, said a 36-year-old Serb was shot in the back and a bullet ended up in his lungs.

Video footage showed police firing tear gas as Serbs hurled stones and other objects at officers. Police officers had to escort customs officers away from the scene to protect them. Serbs also blocked the main road with trucks, the same as last month during a tense situation to do with a spat over vehicle license plates.

A police car and at least two other cars with Kosovo license plates were burnt, according to Kosovar media. Serbian media reported an “extremely tense” situation in the Serb-populated northern part of Mitrovica after Kosovo police raided a pharmacy and some shops in an apparent action to stop the smuggling of goods.

Prime Minister Albin Kurti called on ethnic Serbs in Kosovo “not to fall prey of some media in Serbia protecting crime, corruption and smuggling and want to politicize and turn it (the police raid) into an ethnic issue.” “Crime and criminal groupings will not be tolerated and will be fought. We shall fight and prevent smuggling,” Kurti wrote on his Facebook page.

Serbian Prime Minister Ana Brnabic demanded a “quick reaction” from the “international community,” including NATO and KFOR because she said the situation in Mitrovica is “more than dramatic.”

“This is the last moment that demands clear reaction to stop the mad policies conducted by Pristina,” Brnabic said in a statement. “This kind of conduct … brings us to the edge of chaos.” Petkovic said Kurti wants to provoke “wider chaos.”

Petkovic said Serbian President Aleksandar Vucic is on his way to the Serbian town of Raska that is near Kosovo, where he will hold a meeting with Kosovo Serb representatives. “I am asking KFOR and the international community to react and stop this madness by Albin Kurti,” said Petkovic. “If KFOR can’t react and protect the Serb people, there are those who can.”

European Union foreign policy chief Josep Borrell said Brussels was “in contact with Belgrade and Pristina,” and added that, “All open issues must be addressed through the EU-facilitated Dialogue.”

“The violent incidents in the north of Kosovo need to stop immediately. Unilateral and uncoordinated actions that endanger stability are unacceptable,” he tweeted.

Kosovo, a Serbian province before it declared independence in 2008, was in a war in 1998-1999 between Serbian troops and ethnic Albanian separatists fighting for independence until a NATO air campaign pushed Serb forces away. Kosovo-Serbia ties remain tense despite a European Union-facilitated dialogue over the past decade to normalize them. Last month, Kosovo’s government deployed special police forces to the border crossings to impose a new rule of removing Serb license plates from cars coming into the country, saying that a 10-year-old deal had expired.

Kosovo’s government said it was responding tit for tat to what Serbia had done for the past decade. Protesting the new Kosovo rule, Kosovo Serbs blocked the border with trucks, and people could only cross on foot. Serbian military jets and helicopters have been flying close to the border with Kosovo in an apparent show of force.

The tensions came to an end only after bilateral negotiations were held under the auspices of an EU envoy and a United States senior official and NATO-led KFOR troops took control of the border areas.

One thought on “1 dead, several injured as Kosovo police, Serbs clash during raids”