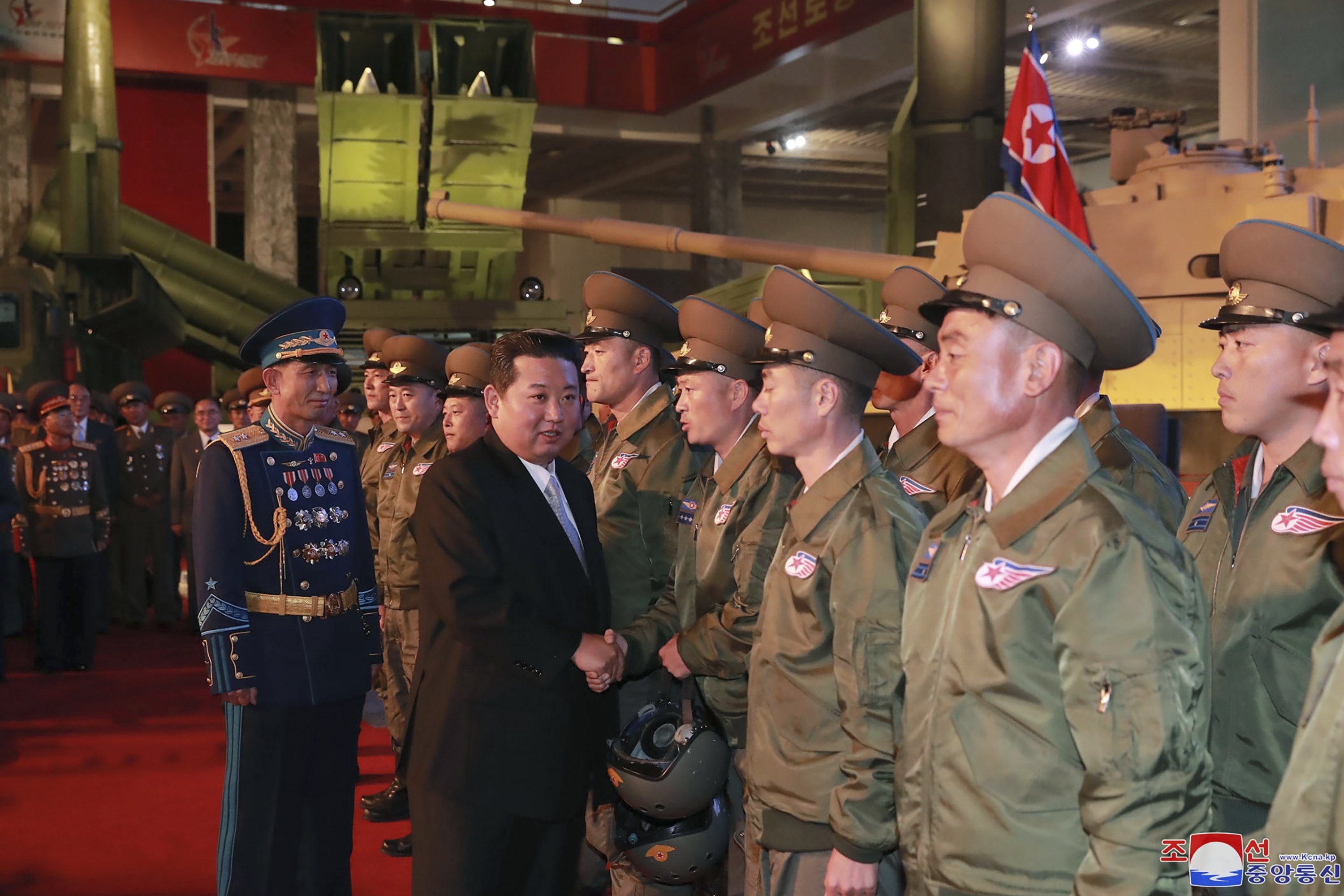 In an apparent continued effort to drive a wedge between Washington and Seoul, Kim also used his speech at a rare exhibition of weapons systems Monday to stress that his military might isn’t targeted at South Korea and that there shouldn’t be another war pitting Korean people against each other.

“The U.S. has frequently signaled it’s not hostile to our state, but there is no action-based evidence to make us believe that they are not hostile,” Kim said Monday, according to the official Korean Central News Agency. “The U.S. is continuing to create tensions in the region with its wrong judgments and actions.”

Calling the United States a “source” of instability on the Korean Peninsula, Kim said his country’s most important objective is possessing an “invincible military capability” that no one can dare challenge.

The exhibition, which KCNA says was meant to mark the 76th birthday of the ruling Workers’ Party on Sunday, was the first of its kind since Kim took power in late 2011, according to Seoul officials. North Korean photos showed Kim, clad in a dark suit, walking on a red carpet lined with big missiles mounted on trucks, passing by a multiple rocket launch system and watching jets flying in a formation.

Yang Wook, a military expert who teaches at South Korea’s Hannam University, said the weapons in the photos include what appears to be a new ICBM that North Korea disclosed during a military parade last year but hasn’t test-fired, Yang said. That missile mounted on an 11-axel launch vehicle during the parade is considered to be the North’s biggest-yet ICBM.

Other weapons on display were another ICBM that North Korea tested in 2017; ballistic missiles that can be fired from submarines or a train; solid-fueled, short-range missiles; and a developmental hypersonic missile that had its first test-flight last month, said Lee Choon Geun, a missile expert at South Korea’s Science and Technology Policy Institute.

“Basically, North Korea wants to send this message: ‘We’ll continue to develop new weapons and arm ourselves with nuclear force, so don’t slap sanctions with these as we can’t agree on the double standards,’” Yang said.

In recent weeks North Korea has sent mixed signals toward its rivals, as it resumed its missile tests after a six-month hiatus but offered conditional talks with South Korea.

During his exhibition speech, Kim accused South Korea of hypocrisy because it criticizes North Korea’s weapons development as provocations while spending heavily to increase its own military capabilities. But he still said his military doesn’t target South Korea.

“I say once again that South Korea isn’t the one that our military forces have to fight against,” Kim said. “Surely, we aren’t strengthening our defense capability because of South Korea. We shouldn’t repeat a horrible history of compatriots using force against each other.”

Some experts say North Korea is attempting to use South Korea’s desire to improve ties to pressure it to convince the United States to relax punishing economic sanctions on the North and make other concessions.

North Korea has long sought improved ties with the United States because it wants sanctions relief and a better security environment to focus on reviving its moribund economy. The high-stakes diplomacy between the countries fell apart in early 2019 after the Americans rejected North Korea’s calls for extensive sanctions relief in return for partial disarmament steps.

The United States has recently repeatedly offered talks with North Korea “anywhere and at any time” without preconditions. Kim has called such an offer “cunning” attempt to conceal U.S. hostility against North Korea, as he wants Washington to ease the sanctions or suspend its regular military drills with Seoul first before the talks can resume.

Despite its recent missile tests, Kim still maintains a 2018 self-imposed moratorium on long-range missile tests directly targeting the American homeland, a sign that he still wants to keep alive chances for future talks with Washington.

In 2017, North Korea conducted three ICBM tests and claimed to have acquired an ability to attack the U.S. mainland with nuclear missiles. Lee, the expert, questioned the North’s claim, saying it needs to conduct several more flight-tests to prove it has overcome the last remaining technological hurdles such as one on protecting a warhead from the extreme heat and pressure after re-entering the Earth’s atmosphere.