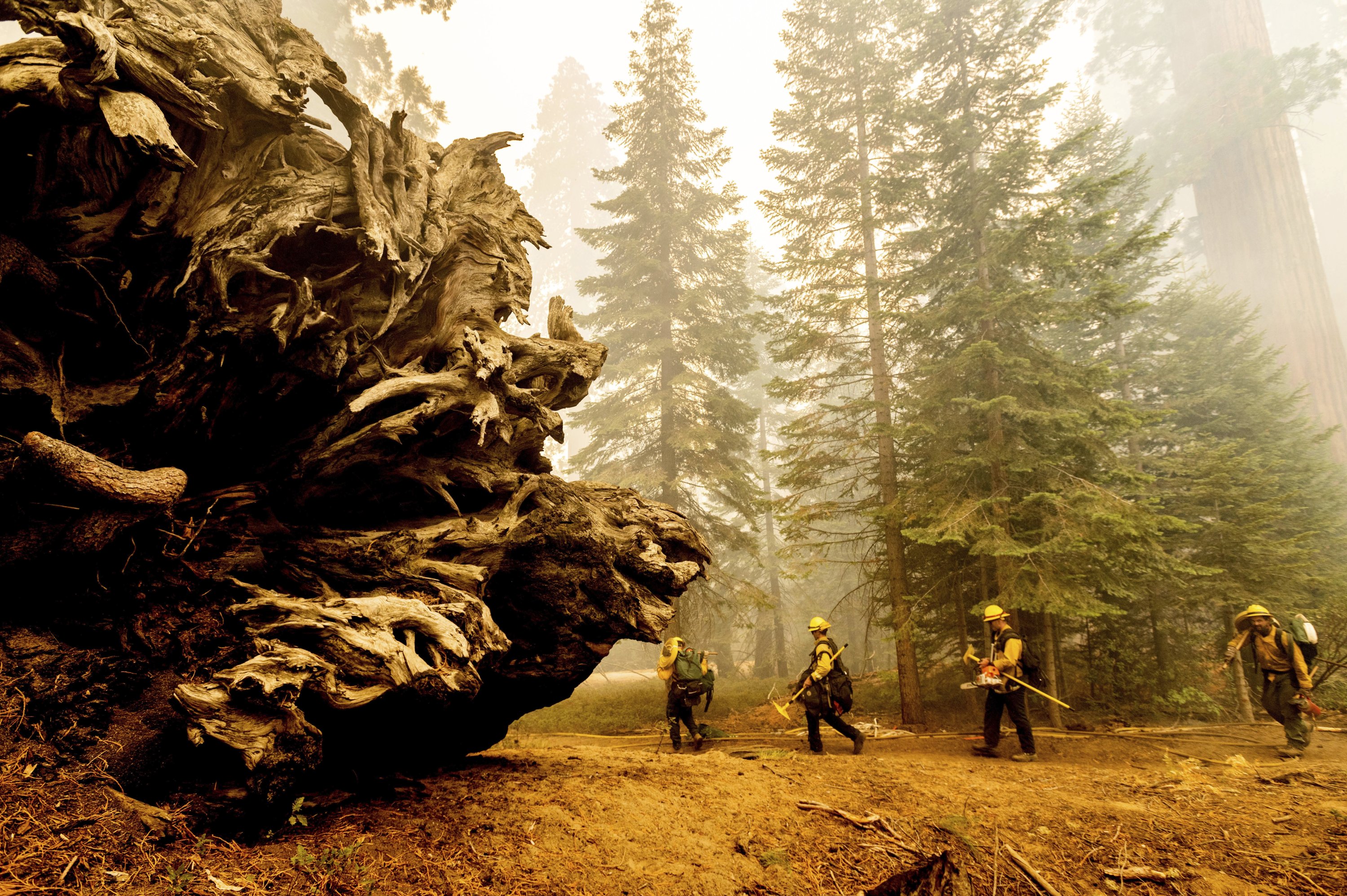 Hundreds of giant sequoia trees may have been burned by the wildfires in Northern California, an official said Wednesday.

The lightning-caused KNP Complex that erupted on Sept. 9 has burned into 15 giant sequoia groves in the park, Brigham said.

More than 2,000 firefighters were battling the blaze in sometimes treacherous terrain. On Wednesday afternoon, four people working on the fire were injured when a tree fell on them, the National Park Service reported.

The four were airlifted to hospitals and “while the injuries are serious, they are in stable condition,” the report said. It didn’t provide other details.

The KNP Complex was only 11% contained after burning 134 square miles (347 square kilometers) of forest. Cooler weather has helped slow the flames and the area could see some slight rain on Friday, forecasters said.

The fire’s impact on giant sequoia groves was mixed. Most saw low- to medium-intensity fire behavior that the sequoias have evolved to survive, Brigham said.

However, it appeared that two groves – including one with 5,000 trees – were seared by high-intensity fire that can send up 100-foot (30-meter) flames capable of burning the canopies of the towering trees.

That leaves the monarchs at risk of going up “like a horrible Roman candle,” Brigham said.

Two burned trees fell in Giant Forest, which is home to about 2,000 sequoias, including the General Sherman Tree, which is considered the world’s largest by volume. However, the most notable trees survived and Brigham said the grove appeared to be mostly intact.

Firefighters have taken extraordinary measures to protect the sequoias by wrapping fire-resistant material around the bases of some giants, raking and clearing vegetation around them, installing sprinklers and dousing some with water or fire retardant gel.

However, the full extent of the damage won’t be known for months, Brigham said. Firefighters are still occupied protecting trees, homes and lives or can’t safely reach steep, remote groves that lack roads or even trails, she said.

To the south, the Windy Fire had burned at least 74 sequoias, Garrett Dickman told the Los Angeles Times. The wildfire botanist has recorded damage as part of a sequoia task force preparing and assessing trees in the fire zone.

In one grove, Dickman counted 29 sequoias that were “just incinerated,” he told CNN.

“There were four of those that had burned so hot that they’d fallen over,” he said.

Giant sequoias grow naturally only in the Sierra Nevada. The world’s most massive trees, they can soar to more than 250 feet (76 meters) with trunks 20 feet (6 meters) in diameter and live for thousands of years.

The trees need low-intensity fire to reproduce. Flames thin out the forest of competitors such as cedars, clearing away shade, and the heat causes the seedlings to open. But fire officials say recent blazes have been much more intense because fire suppression efforts left more undergrowth that’s turned bone dry from drought, driven by climate change.

Last year’s Castle Fire in and around Sequoia National Park is estimated to have killed as many as 10,600 giant sequoias, or 10% to 14% of the entire population.

While some groves may have received only patchy fire damage and will recover, every burned giant sequoia is a loss, Brigham said.

California fires have burned more than 3,000 square miles (7,800 square kilometers) so far in 2021, destroying more than 3,000 homes, commercial properties and other structures. Hotter and drier weather coupled with decades of fire suppression have contributed to an increase in the number of acres burned by wildfires, fire scientists say. And the problem is exacerbated by a more than 20-year Western megadrought that studies link to human-caused climate change.

What options does the government have to ease cost of living crisis? | Politics News