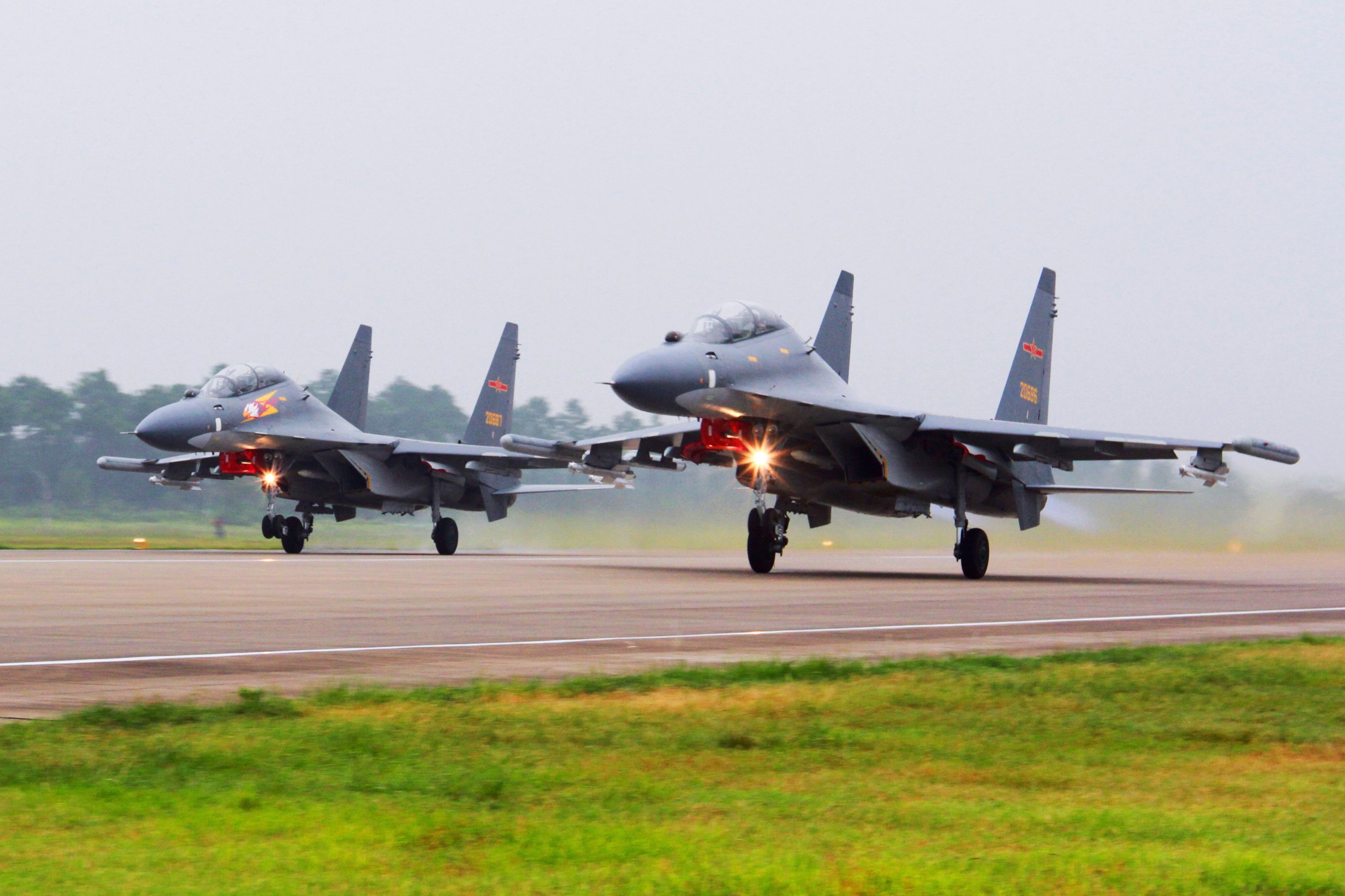 Taiwan reported the largest-ever incursion by China’s air force into its air defense zone, with a total of 56 aircraft flying near the island as Beijing pointed its finger to the United States Monday, dubbing them the “chief culprit” and blaming them for the increased tensions.

Chinese-claimed Taiwan has complained for a year or more of repeated missions by China’s air force near the democratically governed island, often in the southwestern part of its air defense zone close to the Taiwan-controlled Pratas Islands.

But since Friday, when China marked its national day, the country has embarked upon a massive ramping up of its missions, with almost 150 aircraft flying into the defense zone over the space of four days.

The latest mission included 34 J-16 fighters and 12 nuclear-capable H-6 bombers, which all flew in an area in the vicinity of the Pratas Islands, according to a map provided by the ministry. A further four Chinese fighters were spotted on Monday night, taking the total to the day to 56 aircraft.

Taiwanese fighter jets scrambled to warn away the Chinese planes, while missile systems were deployed to monitor them, it added.

The United States on Sunday urged China to stop its “provocative” military activities near Taiwan, while the island’s government has also condemned Beijing.

China’s Foreign Ministry, responding to the U.S. statement, said it was the United States that was being provocative and harming regional peace, with its arms sales to Taiwan and warships sailing regularly through the Taiwan Strait.

“China is resolutely opposed to this and takes necessary countermeasures,” it added.

“Engaging in Taiwan independence is a dead end. China will take all steps needed and firmly smash any Taiwan independence plots,” the ministry said. “China’s determination and will to defend national sovereignty and territorial integrity is unwavering.”

The United States should stop supporting and “inflating” Taiwan separatist forces, it added.

“We sternly tell the Chinese Communists, the Republic of China on Taiwan is determined to firmly defend national sovereignty and dignity and peace across the Taiwan Strait,” it said, referring to Taiwan’s formal name.

“We have a full grasp of the communist military’s movements and have made appropriate responses. We have also been actively communicating and cooperating with friendly countries to jointly contain the Chinese communist’s malicious provocations.”

China has stepped up military and political pressure to try to force Taiwan to accept Chinese rule.

Taiwan says it is an independent country and will defend its freedom and democracy.

The government said on Monday it was actively communicating with friendly countries to jointly contain Beijing’s “malicious provocations.”

Taiwan has termed China’s activities as “grey zone” warfare, designed to wear down Taiwanese forces and test their abilities.

A Taiwan-based source familiar with security matters in the region told Reuters earlier on Monday the Chinese planes were possibly conducting simulated attacks on U.S. carrier fleets, drills the source said that China has repeatedly carried out near Taiwan in the past few months.

The U.S. Department of Defense said China’s increasing military activities near Taiwan were “destabilizing and increase the risk of miscalculation.”

“Our commitment to Taiwan is rock-solid and contributes to the maintenance of peace and stability across the Taiwan Strait and within the region,” it added.

The carrier the USS Ronald Reagan entered the South China Sea late last month. On Monday Japan’s defense ministry said that ship, along with another carrier the USS Carl Vinson, had carried out multinational joint exercises in waters southwest of Okinawa, though it gave no exact location.

Along with U.S. and Japanese ships, vessels from Britain, the Netherlands, Canada and New Zealand took part in those exercises, the ministry said.

The Taiwan-based source said Monday’s flights by the Chinese aircraft were aimed at conducting simulated attacks on that fleet.

Okinawa is home to a major U.S. military base and lies just to the northeast of Taiwan.

Strategies can help you avoid paying extra for Medicare premiums

Why the global soil shortage threatens food, medicine and the climate