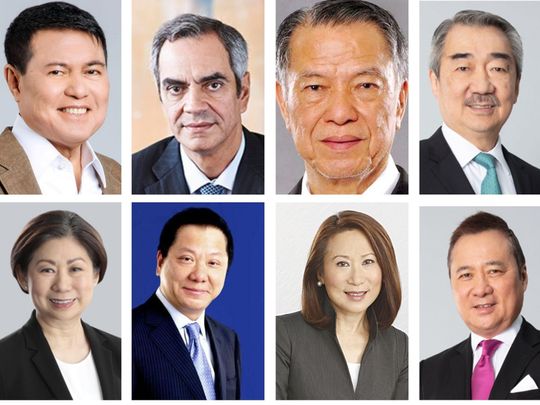 Forbes: A total of 32 listees saw their net worths decline. The Sy siblings took the biggest hit in dollar terms but remain at No. 1 with $13.9 billion. Their fortune was down by $3.3 billion amid a contracting economy and soaring unemployment. Property tycoon Manuel Villar suffered a $1.6 billion drop in his net worth to $5 billion but held on to his rank as the country’s second-richest.

Banking fortunes were especially hard hit. The Ty siblings of GT Capital and Metrobank shed 46% of their fortune, to $1.4 billion. Frederick Dy was down more than 46% to $190 million as shares in his Security Bank fell 52% over the past year.

Oscar Lopez, who holds a majority stake in TV network ABS-CBN, saw his net worth nearly halve to $240 million after Philippine lawmakers in July rejected the company’s bid to renew its 25-year broadcast license; the shares have lost close to 65% of their value over the past year.

Of the 10 listees whose fortunes rose, Edgar Sia II was this year’s biggest gainer in both percentage and dollar terms. He added $300 million, or 75%, to his net worth, which is now $700 million. That rise was partly due to the successful IPO of his MerryMart in June; shares of the grocer have nearly doubled since the listing as quarantine measures boosted sales.

Six names dropped off the list, including Edgar Saavedra of Megawide Construction. Megawide’s shares fell by more than 65% after reporting a first-half net loss of 398 million pesos ($8 million). Megawide’s cofounder Michael Cosiquien, however, stayed on the list as most of his wealth is tied to an earlier sale of the company’s shares. The estate of San Miguel’s Eduardo Cojuangco, who died in June, was inherited by his wife, Soledad Oppen-Cojuangco, who came in at No. 16; she shares the fortune with their four children—Carlos, Luisa, Margarita and Mark.

Similarly, Lance Gokongwei and his siblings debuted on the list at No. 4, replacing their father John Gokongwei Jr., who died in November 2019. Lance Gokongwei shares the fortune with his five sisters: Faith, Hope, Lisa, Marcia and Robina.

Four returned to the ranks: Mikel Aboitiz, Lourdes Montinola, Michael Romero and Luis Virata; their comeback was largely due to this year’s lower cutoff, which fell 23% from last year’s list to $100 million.

This technology can transform renewable energy. BP and Chevron have just invested